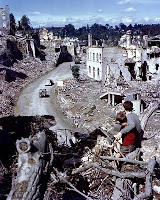 Flee, yes, but where?

After more than two thousand years of doing laundry in their quiet streams, a thousand years after William the Conqueror left Normandy for England, after four years of being conquered by German occupation, and a few days after leaflets dropped from the sky to flee the bombardment for a few days, the women came back to their town, or up from their cellars, or out of their caves, and found their city and every other town and village and hamlet, to look like this.

The war had come to them and, like their river, it had flowed beyond them.

Their homes were in ruins, all of them.