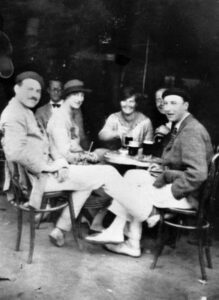 “In the late summer of that year we lived in a house in a village that looked across the river and the plain to the mountains. In the bed of the river there were pebbles and boulders, dry and white in the sun, and the water was clear and swiftly moving and blue in the channels. Troops went by the house and down the road and the dust they raised powdered the leaves of the trees. The trunks of the trees too were dusty and the leaves fell early that year and we saw the troops marching along the road and the dust rising and leaves, stirred by the breeze, falling and the soldiers marching and afterward the road bare and white except for the leaves.
“There was fighting in the mountains and at night we could see the flashes from the artillery. In the dark it was like summer lightning, but the nights were cool and there was not the feeling of a storm coming.”
(This and following quotation from Ernest Hemingway, A Farewell to Arms, Scribner, 1929).

Hemingway’s artistry in letters was, as Gettysburg was in history, an American watershed. His crisp, lean prose painted the contours of a story that all believed that they knew, yet none before had known how to tell. His ability to invoke in the reader’s own senses the image and details from a text that was intentionally sparse was completely different from any American fiction written before, a model and impossible standard for all since. A Farewell to Arms was his first successful novel, the story of a soldier and nurse trapped inside a war that was not theirs and from which they could not escape.

“She had wonderfully beautiful hair and I would lie sometimes and watch her twisting it up in the light that came in the open door, and it shone even in the night as water shines sometimes just before it is really daylight.
“It was lovely in the nights and if we could only touch each other, we were happy.”

Almost primitive in its simple descriptions of war and of love, A Farewell to Arms propelled Hemingway into the first rank of literature. He became and remained larger than life, earning the Nobel Prize for literature in 1954.

Ernest Hemingway died this day July 2, in 1961, in Ketchum Idaho.