Writers on Deck: Spain, and The Red Car 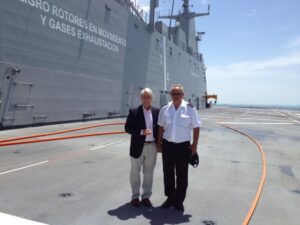 When I was about 10 or so I read a book, The Red Car, in which a boy in a farm town somehow manages to buy a wrecked MG, repair it, and go on to races and adventures. For the rest of my school days I dreamed of driving out of town in my sports car, going on to a life of races and adventures. After many wasted hours of incompetence at restoring sports cars and losing drag races I realized that I was not going to lead a life of races, or adventures.

Some time after that I realized that what had hooked me was not the car or the adventure of the red car. It was the telling of the story — it had made me believe it could happen to me. A well-written book does that. What I wanted to do was to tell stories, more particularly, to write them. It would be another forty years,however, of tracking back and forth before I finally got back on and finished the course I had set for myself, with the publication of my first two novels.
This is what we discussed in Rota, Spain, the last leg of the tour. The Red Car? Not much. My first two novels? Not much? What we discussed is the most important story, the story you write for yourself.
When the dust settled, Rota got the best talk in my years as a fiction author. Kids came forward with their stories. Teachers came forward with their stories. Visitors at the school and the book events came forward with their stories. And, as had been hinted at in Naples, writers came forward to visit with me about the craft of how they could write their stories.
The writing tour was not, I finally understood, about my writing. It’s about their writing, their stories, and yours.
The hot item? A Novel Approach. It wound up on screen at the schools, where everyone wanted to hear about how to describe Monet’s Haystack to a blind person, how to write dialogue that sounds the way people talk.
I wound up hosting dinner afterward with teachers, my MWR host Xavier, and others who came to see me. Over paella and six courses of fish and mussels and crabs and shrimp we talked about just that – writing, telling your story. 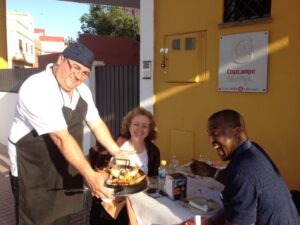 And one wants to learn how to be a writer. He wants to know how to write the story of the day his father was killed, in Afghanistan.

On the last day of the tour I stood on the deck of Juan Carlos I and stared out at the same waters on which Columbus embarked on his quest for India. It was the same place in which British spies, WWII, dumped a body with fake invasion plans, a disguise for the planned invasion of Sicily. I felt more like Columbus than MI-6, having headed off on my particular voyage with a fuzzy notion of where I was going, and ended up being much the richer for it. 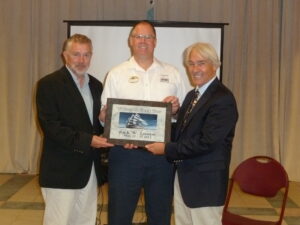 My thanks to Richard Aubrey and Bob Froehlicher in Sigonella, above, handing me a piece of Mount Etna. I sincerely thank Ciro Giordano in Naples; he and his wife Maria are, to be honest, too good looking to show up in pictures. Thank you Xavier Smith in Rota (eating paella, with Alice, above). I thank you all and your wives and staffs who made this tour such a great experience.
My particular thanks, however, go to the students at the DOD schools. Schools are where we learn things, and I surely did.
Now, to stay on course.