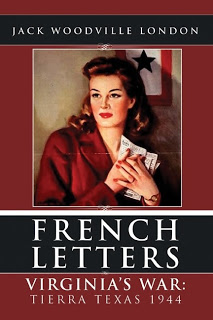 February 13, 2009
Welcome to French Letters, The Novels. I hope you will enjoy reading about the books and the people who have helped to bring them to publication. This blog is for you to share those stories and to share your own, to chat about the plots and characters, and to follow along as Virginia, Will, and the people they know move through life in the last half of the twentieth century and the first few years of the twenty-first.

Book One of French Letters is entitled Virginia’s War, and the subtitle is ‘Tierra Texas, 1944.’ It will be launched at seven in the evening on February 13, 2009, at Book People, in Austin, Texas, and we very cordially invite you to join us as we open the first box, toast the first copy, meet and greet the people who brought French Letters to publication, and maybe even have a bit of reading and signing of first editions.

A wee bit about the book:

Virginia’s War is the first novel of the series. It isn’t in Virginia, as in the state of, nor is it actually a war in the guns and bombs sense. Instead, it is the story of Virginia Sullivan, a young woman who in 1944, in her small town in Texas, learns from the family doctor that she is expecting a baby.

One of my lightly-cooked theories is that a war stops mattering once no one remembers anyone who was killed in it. It’s hard to imagine that over one million men were killed in a space of only a couple of hundred miles over a four year period between 1914-1918, but what was then called the Great War is now all but forgotten. Until a few years ago you could still see pitiful women dressed in black who worked as concierges (more like door keepers than errand-runners) in every home in Paris, all widows of farm boys who were killed in the trenches.

One now reads of soldiers of World War II dying at the rate of one thousand per day, more than in the war itself, and realizes that it will not be long before all of the members of the Greatest Generation will be gone as well. It will not be too many years, I fear, that the war itself will be forgotten, replaced by new wars, new depressions, and new widows. The Second World War, it’s separations, losses, humor, sacrifices and rationing, and uncertainty will be forgotten. French Letters will keep some of those memories alive. I think you will enjoy it.

The pitiful women dressed in black of World War II, our mothers and grandmothers, are the girls who at age 18 or 19 had to look at a boy she had known all her life, or maybe only for a few weeks, and make a decision: do I wait for him? Many couples married before he shipped off. Many waited until he got back. Some, a lot more than you’d think, didn’t wait for anything.

The cover: The cover art is a World War II poster which the Library of Congress authorized for use as the cover of French Letters. The woman standing before a flag with a star is a sign that she had a husband overseas. She is reading a letter called a V-mail, a form that was used to write letters which were microfilmed, put with thousands of other letters, and sent home from the war. On arrival, the Army or Navy enlarged, printed, and sent the V-mail on to the person to whom the soldier had written to or, in reverse, sent them from the States to the soldier or sailor, thus saving the weight and space of millions of paper letters being sent across the ocean in boats that were better used to ship soldiers, sailors, guns, planes, tanks, and supplies.

Not all the V-mails that were sent back and forth were the loving cheery messages that would make everyone fight that much harder. Some of them, inevitably, contained a message that we now call the Dear John letter, an icy dagger of dismissal in which the loving girl who promised she would wait writes to say that she was no longer loving or waiting. Two facts came up during research for French Letters that should be mentioned here.

First, a lot of the soldiers who got a Dear John letter were killed or injured within a few days of getting the mail, presumably being so distraught that they turned to recklessness. It is safe to say, however, that a few of those soldiers were not all that unhappy about being turned loose; the number of babies born in England while American soldiers were stationed there was astonishing.

The second fact I kept bumping into during research for French Letters was that a lot of the mail boats were sunk on their way to the war. Suffice it to say, not all the Dear John letters headed to the front arrived and more than one or two soldiers got a surprise on his return.

The authors who have presented at Book People is an intimidating list — from President Clinton to Sarah Vowell, from Rachel Ray to Karen Gore. Book People, Vire Press, and Pathway have put French Letters – Virginia’s War, in very good company. So, join us in very good company — please mark the date and plan to be there.

On the blog: In the future I’ll talk about the novels, how characters were named, books and authors I enjoy and books and authoris you enjoy, and whatever, clean, respectful, intellectual discourse strikes my or your fancy. So, please write and share your thoughts and questions. There is a button at the bottom of the page to post your notes and subscribe and a menu on the right to let us know about you. I hope you’ll do both.

Enjoy a romantic Valentine’s Day this year with French Letters. Virginia’s War will be waiting for you at the book launch on February 13, 2009. It will be available through bookstores, Amazon, and the Vire Press site on February 15, 2009.