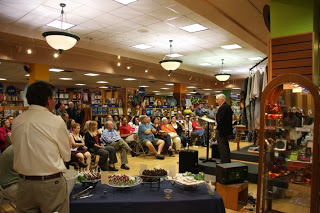 Thank you for such a wonderful launch party! Book People ran out of space for people to stand and ran out of copies for me to sign. Mindy Reed slipped out during the signing and came up with a box that was destined for Maple Street in New Orleans. By the end of the evening, Virginia’s War sold more than three times the number of copies Book People had planned for. Those people you see include all but two of the blurb writers (those puffed up things written on the jacket and inside the cover) and all but three of the early readers — they live in Canada and Europe. And, for bragging rights, former President Clinton was a few blocks away giving a speech on global initiatives — and three of the people who can be seen in this picture are elected officials who supported him when he was President.

What’s in a name?, Redux: The first play on words in the title is the name ‘Virginia.’ It comes from Queen Elizabeth I of England, the virgin queen, of whom they said ‘Latin word is Virginia, or ‘virgin for short, but not for long.’ The name seemed right to me, and Virginia Sullivan she is.

Reviews: I could ask no more than for you to see what the independent review houses are posting on Amazon: Here is one excerpt: “On first glance, it appeared to be nice story, suitable entertainment for whiling away a rainy afternoon with a pot of tea. In reality, this piece falls into what I would term literature rather than a piece of mind-candy. This is the sort of novel one does not come across very often. “

Thank you so much. — Jack