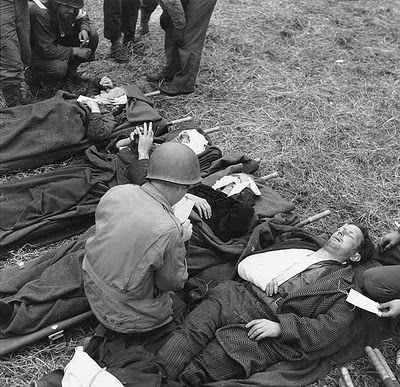 This is a hard photograph to look at, but please do. It’s about us.
One of the most blistering comments made about a recent president was that he was born on third base and grew up thinking he had hit a triple. I’m not sure it was a fair comment for him, but today it seems fair, even generous, to say it about us as a whole.
Today is June 6, 2010. This day in 1944 was D-Day in Europe. The men in this photograph were among 2,499 Americans killed that one day. They were ordinary Americans in a hurricane of extraordinary events. They, and many others to follow, died as heroes they never sought to be. But do we remember them? Most do not: the only memorial to them in today’s newspaper was an old Peanuts cartoon in the Sunday funnies, a reproduction of a photograph of General Eisenhower chatting with 101st Airborne paratroopers shortly before they crawled into the planes, a drawing of Snoopy in World War II battle uniform superimposed on the lower corner. If you want to remember D-Day by reading the paper, Snoopy is your only choice.

We were born on third base. We don’t have to walk to work in the cotton fields because of a want of gas ration coupons, or die in childbirth for want of a wonder drug like penicillin. We have credit that didn’t exist in the 1930’s or 1940’s, activated not only by plastic cards that did not exist and computers that exceeded last century’s imagination, enabling us to buy plasma televisions and iPods and X-box war games and clothes at the Gap, cars for high school students and summer vacations in purpose-built destinations, whether we have jobs or not. And we don’t even have to register for national service, much less be a part of it. We are so far beyond second base.

What is second base, anyway? It’s that beach where these men sacrificed themselves so that their mates, and we, could continue.

I was asked to discuss my French Letters novels with a literary agent not too long ago, a woman from a well-known agency whose print resume said that she specialized in historical fiction with a ‘strong stable’ of such titles in her portfolio. I was interested, not at first surprised, however, when a mid-20ish woman of impeccable finishing school clothes and hair sat down with me and asked me to describe Virginia’s War. I was not prepared for what followed: at my mention of ‘homefront,’ ‘soldier,’ and ‘1944’ within a single sentence, she stood up, said ‘World War Two’s been done — I don’t see how I can make any money on it,’ and was gone before I could register what she had just said. She was born on third base, perhaps with a tiara, and plainly not interested in what had happened on second base to get her there. There was no obvious money in it for her.

Life on third base is good. It has been better, and worse, and will be so again. But if we don’t learn from history, if we don’t look at what happened on second base to get us here, sooner or later history will be repeated.

So, please, spend a difficult moment looking at this tragic picture. These men were someone’s sons, their husbands and brothers, no different from us except for their extraordinary times. There was no money in it for them. But we need to hank those men and all the other men and women who hit sacrifice flies for us, and not forget D-Day. Not today. Not ever.