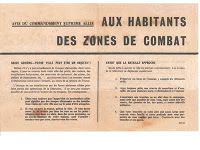 The laundry women may first have heard the sound of war twenty or thirty miles away at the landing beaches, but they would not have known that the war coming to them until this notice fluttered out of the sky, telling them that their town was a likely military target.

“Bear in mind that the bombing is not aimed at you but at the Germans who have set up in your town.”

The leaflet tells them to flee and take with them enough food, water, and clothing ‘for several days.’ If they cannot leave, they should go into a cave, a cellar, or ‘lay on the ground.’ “And, stay away from Germans.”

Few could leave — they had nowhere to go. Every bridge was a separate battle and rivers were no longer for trade and gossip. Life under German occupation meant you could use the roads only with a travel pass. Life under the allied invasion meant that the Germans were the only ones on the roads, and the roads were under constant assault.

The ‘few days’ of bombing lasted from D-Day, June 6, until the last Germans were forced out in late August, 1944.