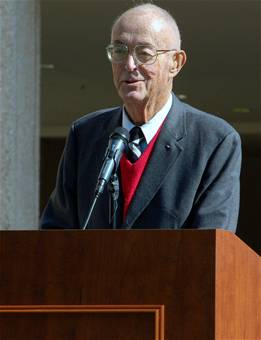 Have you ever stumbled into something that is too good to be true, but turns out to be true? Several years ago I needed a special doctor to explain an MRI, a film that showed where a brain tumor in a client’s head had bulged up against her skull. I was told to contact this retired doctor in San Antonio. Dr. Paul Myers turned out to be just the right man, patient, clear, and helpful in his teaching me the anatomy and clinical issues with the client’s condition. Our consultation eventually became a long-lasting friendship. Paul now is 93 and strong as he can be.

Dr. Paul Myers also is General Paul Myers. Long before I knew him, he had served in our armed forces from the later days of World War II and until his retirement under President Reagan. As soon as World War II ended, the Army helped him attend medical school; he trained as a physician and returned to active duty at West Point. He transitioned with the Army aviation branch when it became the Air Force and continued to pursue more sophisticated surgical training. He became a board certified neurosurgeon but, heeding service over the temptation of wealth, he stayed in the military. His role as the head of the medical department at West Point and, later, as the chief of medical services for the Air Force at training facilities in San Antonio and in Viet Nam contributed to the groundwork for the creation of the Uniformed Services University of the Health, a medical school that trains students to become military doctors. During his command of Wilford Hall he became (and continues to be) the only physician in the world to have done spinal surgery on an astronaut who went on to command a lunar mission (Commander Collins). In the end he became the Surgeon General of the Air Force, the chief of all medical installations, doctors, nurses, administrators, assignments and, ultimately, the health care of every member of the Air Force. And he continued to do surgery right on through the end of his career and into retirement. In recognition of his skill and service, the military created and each year awards in his honor the Paul Myers Medal for Excellence in Military Surgery and Research.

Paul agreed to be an endorser for my second novel, French Letters: Engaged in War, the story of a small-town boy who found himself as an army field surgeon in the Normandy campaign. His kind comments appear on the back cover of the book. However, I was stunned when Paul walked up the stairs of Book People, in Austin, the evening of September 22, 2010 to join my book launch party. I proceeded to watch, almost speechless with joy, when he proceeded to take the affair over to address a crowd of about 200 people about the great advances we have made in saving lives in combat since the Civil War. He was, and is, a show stopper.

Not too surprisingly, he signed almost as many copies of my book as I did. After it was over he hopped back in his car and drove about 100 miles back to his home in the Air Force Retirement Villages west of San Antonio.

All of us have someone like this in our lives. Please share your stories with us here on the blog. We, all of us, are blessed to have such men and women serve us. And, in the meantime, thank you, Paul.