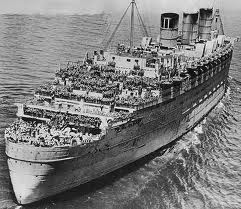 The S.S. Queen Mary sailed from Gourock, Scotland, to New York. The fastest cruise liner on earth, she carried over 6000 soldiers, crew, and prisoners of war to New York in five days. She had minimal escort; her speed was such that no U-boat could catch her. While her staterooms were refitted with bunks, the interior was not so readily adaptable for the war. As a consequence, her indoor swimming pool that spanned two decks and her first class dining room, three stories high, were kept intact for the hostilities. There are no passenger lists for that period but a photograph of the commander shows Winston Churchill beside him.

Few of those who were in Saipan or Normandy are still alive and President Eisenhower died in 1969, two years after the Queen Mary was taken out of service, a victim of jet passenger planes. She was sold to the City of Long Beach for just more than one million pounds and turned into a bar and hotel.