July 7 “The Dog Did Nothing” 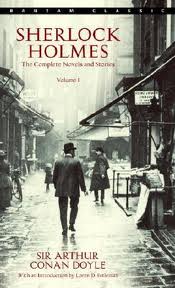 Sherlock Holmes is more real than his creator, Sir Author Conan Doyle. Holmes books and stories continue to sell over one hundred years after first published. Legions of fans troop by 221-B Baker Street in London, an address that does not exist, for a glimpse of the home of the greatest detective in history, who also did not exist. His method, thinking about the facts, led him to solve the crime by a principle that ‘given the choice between the impossible – probable and the improbable-possible, it must be the improbable.’ Holmes was infamous for recounting to complete strangers their most intimate details from looking at the dirt on their boots, the stitchery of their clothes, which finger had a tobacco stain, and the limp that comes from years on a slanted deck. Less tidy in his own life, given to keeping his pipe tobacco in an old slipper and using a revolver to shoot a patriotic ‘VR’ pattern in the wall of his home, he was merciless in sending poor Doctor Watson as lead man for an investigation, only to turn up in disguise and humiliate the narrator with observations that were obvious to all but those who were in the story. Such was the observation of the curious incident of the dog in the night, a point made by Holmes to a bumbling police officer investigating the disappearance of a famous race horse:

It took poor Gregory even longer than the reader to realize that the dog should have barked – unless the criminal was known to the dog.

Given as much to the occult as to the observational sciences, Doyle was deeply involved in trying to connect with the spirit world. And, in a ‘life imitates art,’ Doyle used his powers of deduction to exonerate two men unjustly convicted of crimes that he was convinced they could not have committed. His efforts are credited with leading to the creation of Britain’s modern courts of appeal.