July 8: History that should have been fiction 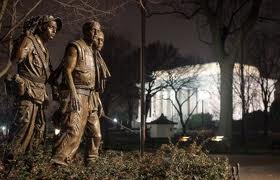 In 1959, Dale Ruis, an Army major, and Chester Ovnand, a master sergeant, volunteered for a little-known unit called the South Vietnam Military Assistance Group, a collection of advisers who had been sent to Vietnam to assist the Republic after the French had been defeated there in 1954.

On July 8, Ruis and Ovnand were sent to Bien Hoa, a troublesome city twenty miles from Saigon where Viet Cong sympathizers were becoming increasingly brazen. The unit they accompanied was ambushed. Ruis and Ovnand become the first two American soldiers killed in a war that would last sixteen years and cost over 58,000 more American deaths.

On July 8, 1972, another American arrived in Viet Nam. Flying from Paris to Moscow, then on to Vientiane on an Aeroflot flight that did not list her on the manifest, Jane Fonda arrived in Hanoi. While there she would be photographed in North Vietnamese uniforms at an anti aircraft gun, visit American POWs, and broadcast antiwar messages over Radio Hanoi.