May, Mothers, and Memorials: A Month of Unexpected Connections 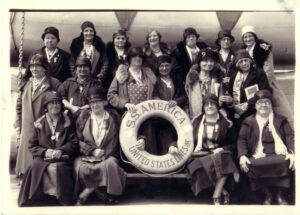 On the second Sunday of this month we honor our mothers. On the last Monday we honor our fellow citizens who gave their lives in our military service. Few realize how much these two special days have in common.

Our mental impression of trans-Atlantic voyages on luxury liners is formed by black and white movies of the 1930’s, images of wealthy socialites, escapees from the oppression of the Depression, throngs at the gangways cheering passengers crowded on deck. But, as the month of May takes hold, take a moment to re-focus on other images and reflections. There are unexpected connections between those voyages, the Civil War, the Great War (World War I), and the month of May.

Beginning in May, 1930, the Army Quartermaster Corps began to escort the first of some 6675 women on luxury liners to Paris. These were not just any women, however, nor were they ordinary luxury liners. Each of the women had, at one time or another, put a white flag with a blue star in their window, a custom begun in 1917 by an Army officer who had two sons on the front line in France during World War I. The blue star represented a son or husband in service in the war. But these particular women had an even more painful honor – they had covered the blue star with a gold star on learning of the death of their son or husband.

Memorial Day emerged from a proposed national day of reconciliation after the Civil War, a day to honor the sacrifices of men from the south as well as the north. Mother’s Day, however, was almost the opposite. It began in 1870 as a call to mothers to protest the futility of that war’s killing of their sons in the pursuit of political disagreements. It was organized by Julia Ward Howe, who only eight years earlier had composed the anthem Battle Hymn of the Republic to rally the North. From anyone’s perspective, hundreds and hundreds of thousands of young men were buried in a soldier’s grave far from home. While no one disagreed with a day of remembrance for them, women in particular wanted an end to war. War did not end, not then, nor on the Indian frontier or in Cuba or the Philippines.

Still, no one was prepared for what happened in World War I, when more than another one hundred thousand of their sons were cut down in battle. This time, however, the graves could not be reached, not by any ordinary widow or mother.

In March, 1929, the Army Quartermaster Corps proposed and the Congress enacted a bill to change that. Nestled between acts to build bridges and improve prisons, Public Law 1506 established a fund to pay for pilgrimages to American cemeteries in Europe for the mothers and widows of Soldiers, Sailors, and Marines buried there. The United States, even in the throes of the Depression, honored both Mothers Day and Memorial Day in a way never seen before or since – it took the mothers to visit their sons’ graves in France, a trans-Atlantic voyage beyond the means or hopes of all but the wealthiest of Americans.

The first Gold Star mothers sailed on the S.S. America on May 7, 1930. Every voyage departed from New York. For many of the mothers on board, the voyages duplicated their sons’ last voyage. The S.S. America had served as a troop ship in World War I, transporting some four thousand doughboys per crossing from New York to Brest, France, thirteen years before it began to take their mothers. For the next three years, American women of all races and social levels were escorted to France, often on ships that had been confiscated from Germany in 1917 and used as troopships. The pilgrims docked at Cherbourg and entrained for Paris where, according to Constance Potter, they were given rooms in the Hotel Imperator. Escorted by American officers, each woman was taken across northern France to the American cemetery where her son lay. There were no public ceremonies; each woman was escorted to her son’s grave and given a wreath. She could stay as long as she liked; there was no hurrying from place to place. In some instances the women also were taken to the fields of Chateau Thierry or Belleau Wood, where their boys had fallen, or to Compiegne, where the Armistice was signed.

The pilgrimages were not entirely without controversy. The widows and mothers of black troops traveled by decidedly reduced means and stayed in lesser hotels in what the government provided as separate but hardly equal arrangements. One mother died during the voyage. Another, when asked on arrival whether she would be agreeable to having a new room-mate at the hotel, told her French hosts that she didn’t care who they put in her room “as long as it isn’t a Frenchman.” The Quartermasters and embassy officials had a difficult time persuading some of the hotels to cook bacon and eggs for women who were accustomed to starting the day with more than strong coffee and a croissant. And, as today, a group of elected objectors took the government to task for funding the trips at all, saying the $850.00 per woman would have been better spent elsewhere.

The last sponsored voyage of the Gold Star mothers was completed aboard the S.S. Washington in August, 1933. However, the journeys of neither the vessels nor the mothers ended then. The S.S. Harding, the Roosevelt, and the Washington became troop ships in World War II. The S.S. Washington also had the honor of transporting American and neutral refugees from Europe to the United States in June, 1941, six months before the United States entered the war. One hundred eighty miles off the coast of Portugal it was stopped by a German submarine that signaled ‘ten minutes to abandon ship’ before being torpedoed, an act of war reminiscent of the Lusitania and Athenia attacks. The Washington stood fast, repeatedly signaling that it was an American ship and, after a tense hour, the submarine departed, radioing to Berlin that it had encountered an American liner and, ‘after the usual courtesies at sea, continued on its way.’

Gold Star mothers have not made their last pilgrimage. Between 2000 and 2011, a private association escorted Gold Star mothers to the battlefields in Viet Nam where their sons died. Nine Gold Star Mothers traveled to Sulaymania, Iraq, in October 2010. Today, Gold Star and Blue Star mothers support our service men and women in hospitals, hospices, and family care of all kinds.

This May, one hundred fifty years after the onset of the Civil War, we still salute the two special days of peace and remembrance born of that conflict. Mothers, all mothers, deserve our gratitude. Those mothers whose children died in our service deserve our highest praise and our efforts to respect their prayer for peace. And, in memory of those children, each of us must honor them with the respect and gratitude that every member of our grateful nation owes for their sacrifice. Mother’s Day and Memorial Day, together.

Jack Woodville London is the Author of the Year of the Military Writers Society of America for his novels Virginia’s War and Engaged in War.

He discovered during research for this article that the aunt he did not know, who had raised London’s orphaned father, had herself been a Gold Star pilgrim for a cousin no one talked about, she having voyaged to France to visit the grave of her son who died in the Second Battle of the Marne. Private Thomas Graves is buried in the Meuse-Argonne American Cemetery near Romagne, France, Plot D, Row 34, Grave 26, where he was laid to rest after having been killed thirty-five days before the declaration of armistice on November 11, 1918.