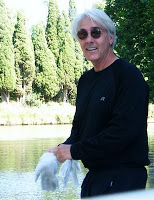 In the mid 1600’s, days of quill pens and before there was a single paved road in America, France built the Canal du Midi, connecting the Atlantic and Mediterranean with a waterway that runs up and over mountain ranges and through craggy rocklands and dense forests. Canals became the fastest way to move anything anywhere until the development of railroads. They now are the fastest way to do one thing and one thing only — recharge batteries.

Alice and I spent a week on the Canal before I flew off to Boston to begin a trial. We rented a houseboat in Castelnaudary, ate cassoulet and stocked up on cheese and plonk, then raced toward Carcassonne at 3 kilometers per hour (not counting delays to navigate the locks). A week later, after castles, street markets, boulangeries, and endless rounds of Boggle, we turned the boat in at Hompes.

The result: I slowed down enough to finish the last chapter of the sequel to Virginia’s War. I am putting the last touches on Will right now, then will ask some technical readers to take a look before I send it to Vire’s editor, Mindy Reed. Look for it; it’s coming.
Thanks, and see you soon.
Jack