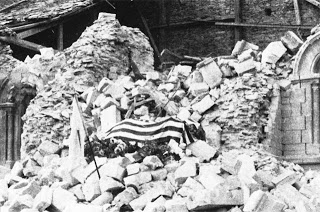 Major Thomas Howie used a field telephone to tell his commanding officer that his battalion of the 116th regiment would not quit until Howie would “See you in St. Lo,” the critical French crossroads market town defended by Germany and attacked by the United States beyond the point of destruction. Howie then led his men to attack uphill to seize the high ground at Martinville, a hamlet that blocked the attack. He was killed by mortar fire but his men honored their leader: Major Howie was the first American in St. Lo after his unit broke through. His body was draped in a battle flag and put on the hood of a jeep, then driven to the rubble of the abbey church of Ste. Croix. Every soldier in the 29th and 35th divisions who entered St. Lo in the next 24 hours marched past and saluted the first man American to enter the city. The attack succeeded, the war moved on to the next critical battle, and Major Howie and thousands of other dead and wounded remained behind with the French in the Capital of the Ruins.
RETURN TO WRITING PAGE
Back to Top