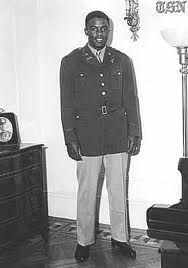 July 6, 1944: One month to the day after the Allied landings in Normandy, D-Day, Second Lieutenant Jackie Robinson traveled from a hospital in Temple, Texas, to Fort Hood, Texas, a distance of approximately twenty miles. He had been sent to the civilian hospital by the army to evaluate his ankle, injured in sports before he was drafted. Commissioned as an officer in 1943, Robinson petitioned for a medical waiver so that he could be assigned to a Europe-bound unit as its racial morale officer.

Three years later, Robinson would become famous for breaking the black color barrier to play major league baseball. However, on July 6, 1944, he was just riding in a civilian bus, returning to his military base, when the driver ordered him to sit in the back. Robinson told him to concentrate on driving and did not move. The bus stopped at an intermediate station and the driver resumed the argument, calling his dispatcher who referred to Robinson as a ‘nigger.’ When the bus arrived at the fort, a white MP went on board to arrest ‘the nigger lieutenant.’ Robinson reacted in an excited manner and denied that there had been an incident. He was arrested and charged with inciting trouble.

Robinson was acquitted by a general court martial, but his request for a medical waiver was denied. His unit went on to serve with distinction in Europe, particularly in the Battle of the Bulge. Robinson was not with them; the Army had discharged him in November, 1944.