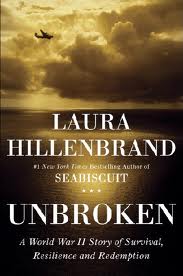 Unbroken (2010), Random House, $27.00, by Laura Hillenbrand is a magnificent account of an ordinary boy who became an extraordinary hero, a history and biography of an American in World War II and, by implication, of the American home front and of America caught up in a desperate war.

Unbroken is the story of Louis Zamperini, a small town boy and budding delinquent who, at the urging of his brother, became a high school track runner and at age 16 set a national high school record for the mile, a mark that endured for 19 years. From goat to hero, Louis became the pride of Torrance, California. At age 18 he switched to the 5,000 meter distance and raced his way into the Berlin Olympics where almost caught the Finnish favorites by running a bell lap almost 12 seconds faster than anyone in Olympic history. He celebrated by trying to steal a Nazi flag from the Reichstag, then escaped with a scolding, and the flag. Master of all he attempted, Louis won a scholarship to the University of Southern California and set his sights on the 1940 Olympics to be held in Tokyo. Louis made it to Tokyo, but not as planned. When World War II erupted he was pulled straight from university to the Army and, for the first time, found himself trapped by forces far beyond his control.

Laura Hillenbrand is an elegant writer, unequaled in her ability to craft the story of the American home front and the war front as modern Hellenic tragedies from which heroes emerge. Zamperini was an unlikely Odysseus, the navigator of a B-24 Liberator whose plane ditched in the Pacific. Hillenbrand carefully brings him and his pilot on the longest known survival raft trip in history, a 47 day drift across the Pacific without food or water, keeping them alive by trapping rain, grabbing pilot fish from the backs of sharks, and willing the two of them to survive on little more than endless storytelling under the relentless sun.

She rescues Louis and Phil with a boat that, in Homeric fashion, comes not to rescue but to capture – the Americans have floated into Japanese territory. They are seized, imprisoned, and sent to Japan, where their first detention is at the Ofuna interrogation prison. Louis’ status as an Olympic runner made him a target for the guards, who between his beatings and starvation made him race on shriveled legs to prove how superior were his captors. Unbroken crafts his story so carefully and gradually that each page brings the certainty of Zamperini’s death at the hands of a war criminal, leavened by hope for survival in a war that, for him, was little combat and much will power, an internal struggle to find a reason to live that exceeded the external opportunities to give up or to die. Then, Hillenbrand draws Louis’ odyssey to a close — when he survived the end of the war by the barest of luck, when many of his friends both in the prisons and in his old unit had died, he came home to joy, love, and — disaster.