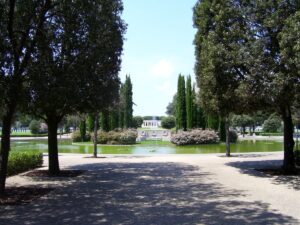 Naples, the most bombed city in Italy, is flanked by Salerno on one side, Anzio on the other. Texas’ 36th Infantry Division was the first American unit to land on mainland Fortress Europe, wading ashore under fire. After months in daily combat, the 36th was decimated in an ill-advised order to take a hill above the Rapido River a few miles below Cassino. My own Letters Project began when I was asked to read the final letters sent home by a soldier killed near Caserta.
There are 7,861 Americans in the military cemetery at Nettuno, and another 3095 names on the wall of the missing. These are hallowed grounds.

I had been warned off Naples by our friends Gem and Martino, who live nearby, by Rick Steves, and by Norman Lewis, who spent most of World War II there fighting a losing battle against closet Fascisti, unparalleled black market thievery of allied shipping, and poverty that turned nuns into working women and all others into worse. The warnings should be withdrawn – I love the city. We were met by Ciro Giorgani, the librarian for NAS Naples and a gentleman who loves books and history, a trained librarian who has lived in Naples since age 14 or so, and his wife Maria, a born Neapolitan who works at a the base. Within minutes they had become guides; within hours, friends. We parked at the docks, walked to the Umberto Gallery, spent an untroubled hour in the royal palace, and wandered around Castel Nuovo and Castello dell’Ovo, the bookends to Queen Joanna’s tumultuous reign eight hundred years ago.

Ciro and Maria drove us out to Procida Peninsula, casually passing demi-crumpled ruins of a Temple to Apollo and a Roman amphitheater where, next door, Sophia Loren grew up. We saw the sea where, long before Queen Joanna, or me, or World War II, Odysseus bound himself to the torture of the Sirens, their songs taunting him to crash on the rocks between Naples and Sirenussae, all in plain view, to the imagination, from Procida. And, like Odysseus, I felt a strong temptation to forget why I was there and where I was supposed to be going. Until the next day.

The DOD school at NAS Naples gave me a couple of hours with high school and junior high students. By then, I knew that my idea of a book tour was not only archaic, but obstructive. There, I learned from the students: What is the most important story? That is all we talked about, really. Oh, sure, we discussed that books and stories have beginnings, middles, and ends, and that (like the Odyssey) they often have more back stories than main plots. But mostly we talked about them.

My course corrected entirely when I met a tiny girl, a twelve year old girl, who had written her first novel and put it up on Amazon. Earth to Jack: the book tour was not about me, or my books. The tour was about ‘You can do this, but you have to want it.’ We talked about Wallace and Gromit flying to the Moon and about Calvin telling his dad that he wanted to be a millionaire but didn’t want to work for it – he wanted to inherit it. By the time we left the school, the challenge was to answer this: ‘I want __ so badly that I am willing to ___ for it.’

The book events were very special. I met a young sailor from Indianapolis who reads a dozen books a month. I met a married couple, he a pilot, she a teacher, who wanted to talk about how to do research for historical novels. One officer had been on staff at the Navy office in London; he preferred sunny Italy. I met even more students who came with their parents after school (and they are devoted to their teacher, Ms. Navo). A couple of guys who had been fleet mechanics and oilers but now have worked their way up to run a television camera came and decided to do an interview on the base TV. 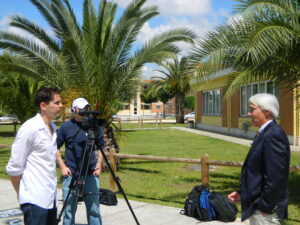 Mostly, though, I met more people who are happy with their career of going wherever we need them to take care of us, one sailor at a time. Their memories may become the stuff of novels, but their stories are real. It was during Naples and the book events that I realized that my pecking away on Book 3 was headed way off course, and there it was that I decided to change it. Course correction.

It was hard to leave Naples and Ciro and Maria and my friends Gem and Martino, who made it over for dinner one evening. But Alice and I knew we had found a new place to love, more people to care about, and we had the relief of feeling that I was back on track.